Why not ensure 100% absorption of your vitamins and minerals?

Intravenous (IV) therapy is a method of feeding vitamins, minerals, and amino acids directly into the bloodstream used to correct intracellular nutrient deficiencies. Oral intake of such high doses is simply not possible due to absorption limitations from the digestive process. Patients can get up to 10 times the nutrients in one treatment as they could get orally in one day.

A good example of this is the use of Vitamin C when trying to overcome a cold. The antiviral effects of Vitamin C are seen when blood levels are around 10-15 mg/dL. This level is achievable with IV therapy but not orally. Oral dosage typically peaks with blood levels around 1.2-4.0 mg/dL vs. IV therapy of 50-90 mg/dL.

Check out our videos on the top of the page to see how IV Therapy has helped many patients.

Some research studies have demonstrated that a variety of conditions can benefit from the use of IV nutrition. A few of the conditions that may be helped include: 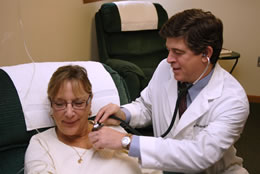 IV therapies are also useful in nutritional detoxification programs, immune stimulation or, simply, because of depletion of your body stores. Below is a short list of the unique IV therapies that are offered at MWA.:

Alpha-lipoic acid is an antioxidant that is made by the body and is found in every cell, where it helps turn glucose into energy. Antioxidants are substances that attack "free radicals," waste products created when the body turns food into energy. Free radicals cause harmful chemical reactions that can damage cells in the body, making it harder for the body to fight off infections. They also damage organs and tissues.

Alpha-lipoic acid can lower blood sugar levels, and its ability to kill free radicals may help reduce pain, burning, itching, tingling, and numbness in people who have nerve damage caused by diabetes (called peripheral neuropathy). Alpha-lipoic acid has been used for years for this purpose in Europe, and at least one study found that intravenous (IV) doses of alpha-lipoic acid helped reduce symptoms.

Because alpha-lipoic acid can pass easily into the brain, it has protective effects on brain and nerve tissue. Scientists are investigating it as a potential treatment for stroke and other brain disorders involving free radical damage. Animals treated with alpha-lipoic acid, for example, suffered less brain damage and had a four times greater survival rate after a stroke than animals who did not receive this supplement. More research is needed to understand whether this benefit applies to people as well.

High doses of alpha-lipoic acid are approved in Germany for the treatment of diabetic neuropathy.

Glutathione IV: WHAT IS GLUTATHIONE?

Deterioration of sight, including: Cataracts, Macular Degeneration, and Diabetic Retinopathy are one of the most common problems associated with aging. Current medical research has proven that visual decline can often be improved or reversed with anti-oxidant therapies. Special “vision drips” including anti-oxidants, fatty acids, amino acids, carotenoids, minerals, and glutathione are used individually or combined with chelation to enhance visual decline.

Chelation Therapy: IV nutritional therapy that uses either Calcium EDTA or DiSodium EDTA to remove heavy metals, improve blood flow, and remove artery damaging chemicals from the blood vessels. Some of the health conditions that benefit from chelation therapy include hypertension, heart disease, memory decline, autism, diabetic complications, and many others.

Anti-Fungal IV: Many patients suffer from the“yeast syndrome”, as described by William Crook, M.D., in his best selling book. Fungus can develop and contribute to a myriad of health problems including diabetes, chronic fatigue syndrome, multiple chemical sensitivities, allergies, asthma, depression/anxiety to name a few. The ABC’S care considered to be the major triggers for this disorder—Antibiotics, Birth Control Pills, Cortisone (Prednisone), and Sugar found in the typical American diet. IV anti-fungal drips are used to inactivate fungus and improve immune function.

Migraine IV: For millions of Americans, migraine headaches can be disabling often leading to countless medications often replete with side effects. The Migraine IV “cocktail”utilizes concentrations of magnesium, riboflavin, and other key nutrients to relieve acute episodes of migraine and prevent future occurrences.

Magnesium IV (Intravenous Infusion): MAGNESIUM is the second most plentiful mineral in the intracellular fluid and the most plentiful cation in the body. Magnesium is involved with more than 300 enzyme systems. The body contains about 25 grams of magnesium, which is divided in roughly equal portions between the skeleton and soft tissue.

(For more information, check out the Moss Reports)